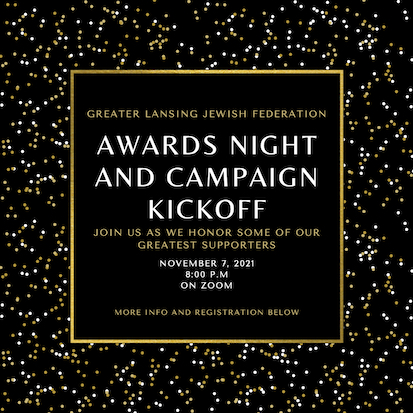 Hear what Federation has done lately for the Lansing Community and Jews around the world and what we hope to do in the coming year.

And join us in honoring some of our greatest Federation donors:

Martin and Elaine Pearlman, for their years of generosity and Elaine’s work as a former President of GLJF.

Esther Morrison, who has been giving to Federation since the 1940’s.  Esther and her late husband, Jud, were there from the start for the new, independent state of Israel and  have continued  their support  for Israel through good times and when its existence was threatened.

Stan and Toba Kaplowitz, who brought Project Rozana to the attention of GLJF and for years of generous contributions and Stan’s long work as an officer.

This year, in honor of Susan Davis and in memory of Jack Davis, a portion of the Greater Lansing Federation Campaign will be donated to at-risk children in the Lunch and Learn Program in Dimona, Israel, which Jack was instrumental in bringing  to our attention and support.

The hour long event will be interspersed with awards, recognition and entertainment.

There is no charge to attend or limit to people you want to invite.